Market insights for the new year.

The wild ride of early 2020 will not be forgotten anytime soon. U.S. markets plunged 35 per cent in March and then swiftly recovered to near market highs in only a few months, in one of the fastest recoveries on record.

Tech stocks have soared and dipped and soared again. The U.S. presidential election stirred up strong emotions that, in some cases, caused deep rifts within communities that could take a lot of time and goodwill to heal. And all the while, the COVID-19 pandemic has continued its rampage, delivering a second global wave and leaving us all to brace for what happens next. The constant, adrenaline-pumping highs and lows involving health, politics and the economy have left many feeling drained.

As we think about what to expect, it might be fitting to begin with the Canadian Farmers’ Almanac, which describes the 2021 winter season as “unusual.” The almanac calls it “the Winter of the Great Divide,” predicting “wet, white and wild” weather with unusually cold temperatures in the west, and unsettled weather in the east with above-seasonal snowfall for central regions and warmer-than-usual temperatures for the east coast.[1]

So, what’s easier to predict – the weather or how markets will fare in the months ahead? Philip Petursson, Chief Investment Strategist with Manulife Investment Management, sees definite signs that the economy is recovering, allowing for optimism heading into 2021.

“When you look at a number of indicators, there is a lot of good news,” says Petursson. “We are seeing near-complete recoveries in a number of economic indicators, including U.S. durable goods orders, U.S. retail sales and new U.S. housing starts. And in the manufacturing sector, there are steady gains being made in Canada, the U.S. and Europe from the sharp drop of March 2020 due to pandemic shutdowns.”

Looking ahead, Petursson says, “There may still be minor market corrections along the way, but the overall assessment is that governments will be reluctant to order another shutdown. Rather the strategy moving forward will likely favour managing the health care impact. So, it’s expected that the economy will continue its gradual recovery through 2021.”

US Manufacturing is rebounding on much lower inventories 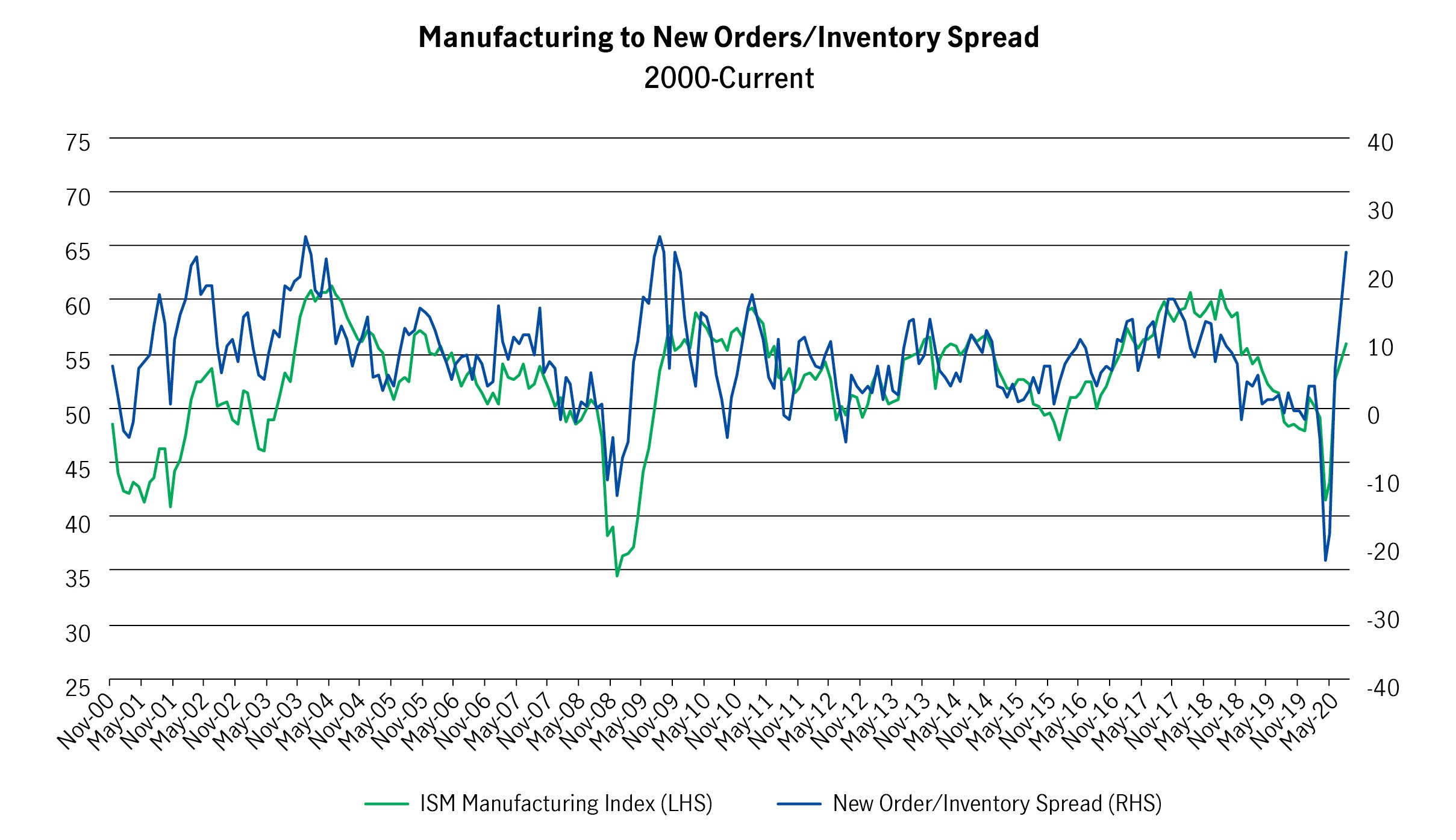 The worst may be over for global trade

Just as global trade was starting to improve following the phase 1 trade deal between the US and China, the global pandemic COVID-19 has ground it to a halt. However, given that economies have started to slowly reopen, we have likely seen the worst of the impact. 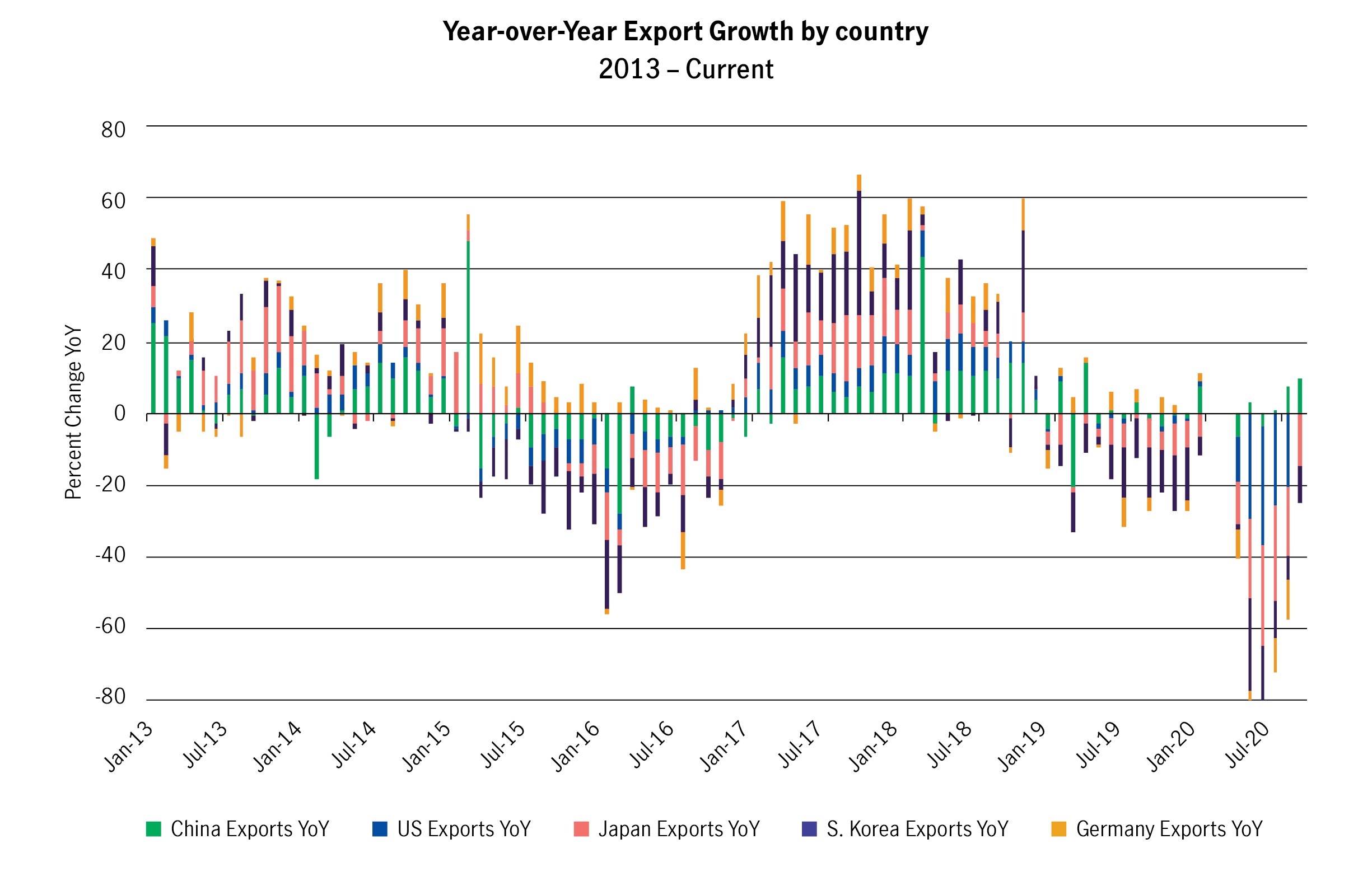 As China is the largest importer of copper, an increase in price for copper is usually tied to an increase in demand from China. Due to its broad use throughout various industries, the price of copper is often seen as a good indicator for the health of the Chinese economy. The recent increase in prices should indicate an improvement in economic growth in China and could also lead to a stronger global economy. 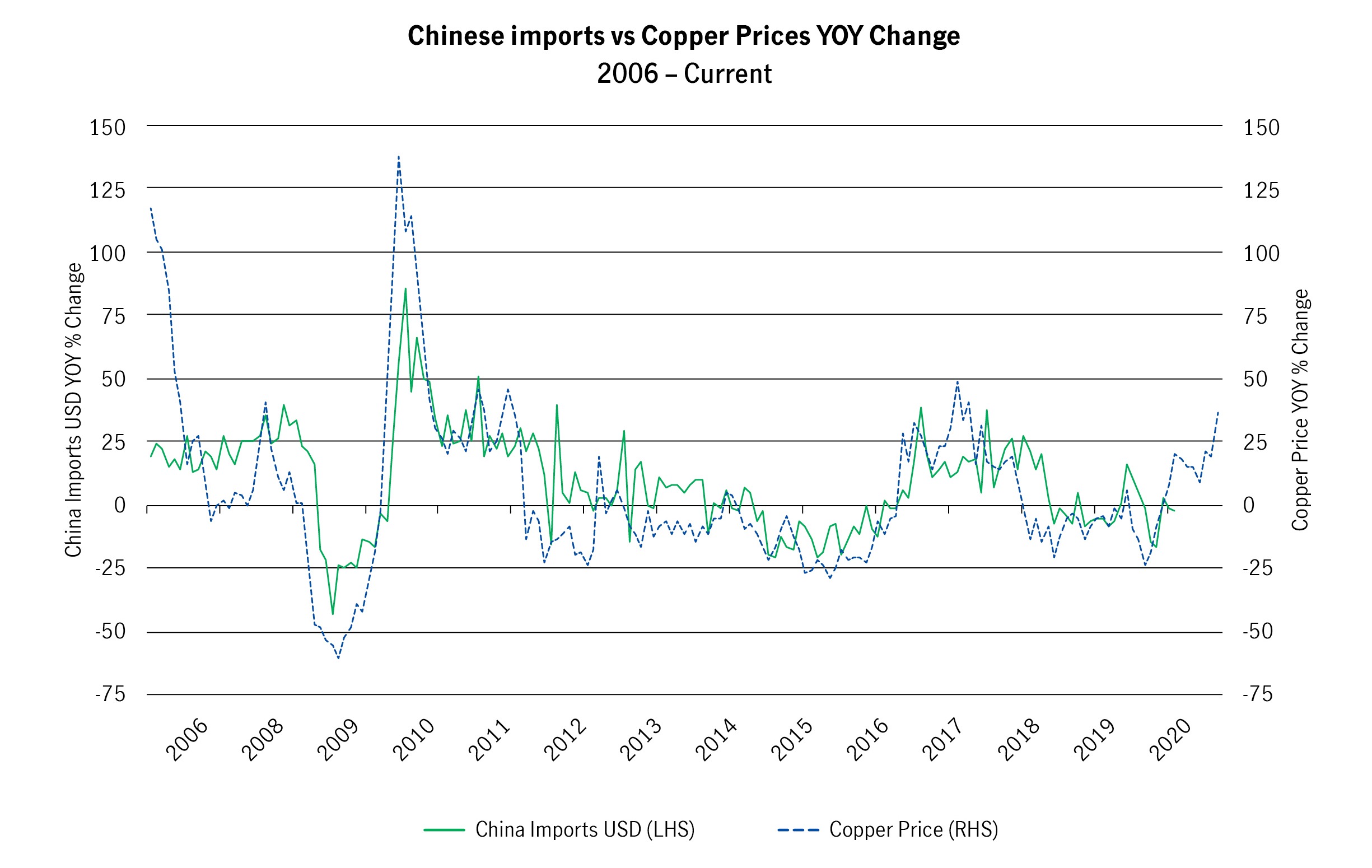 Unprecedented levels of quantitative easing to support economies during the rapid pandemic-related shutdown of early 2020 increased money supplies in the United States, Canada and globally. In terms of money supply growth, the United States is well ahead of Canada, Europe and Japan, with the Federal Reserve balance sheet now registering at more than US$7 trillion.[2] 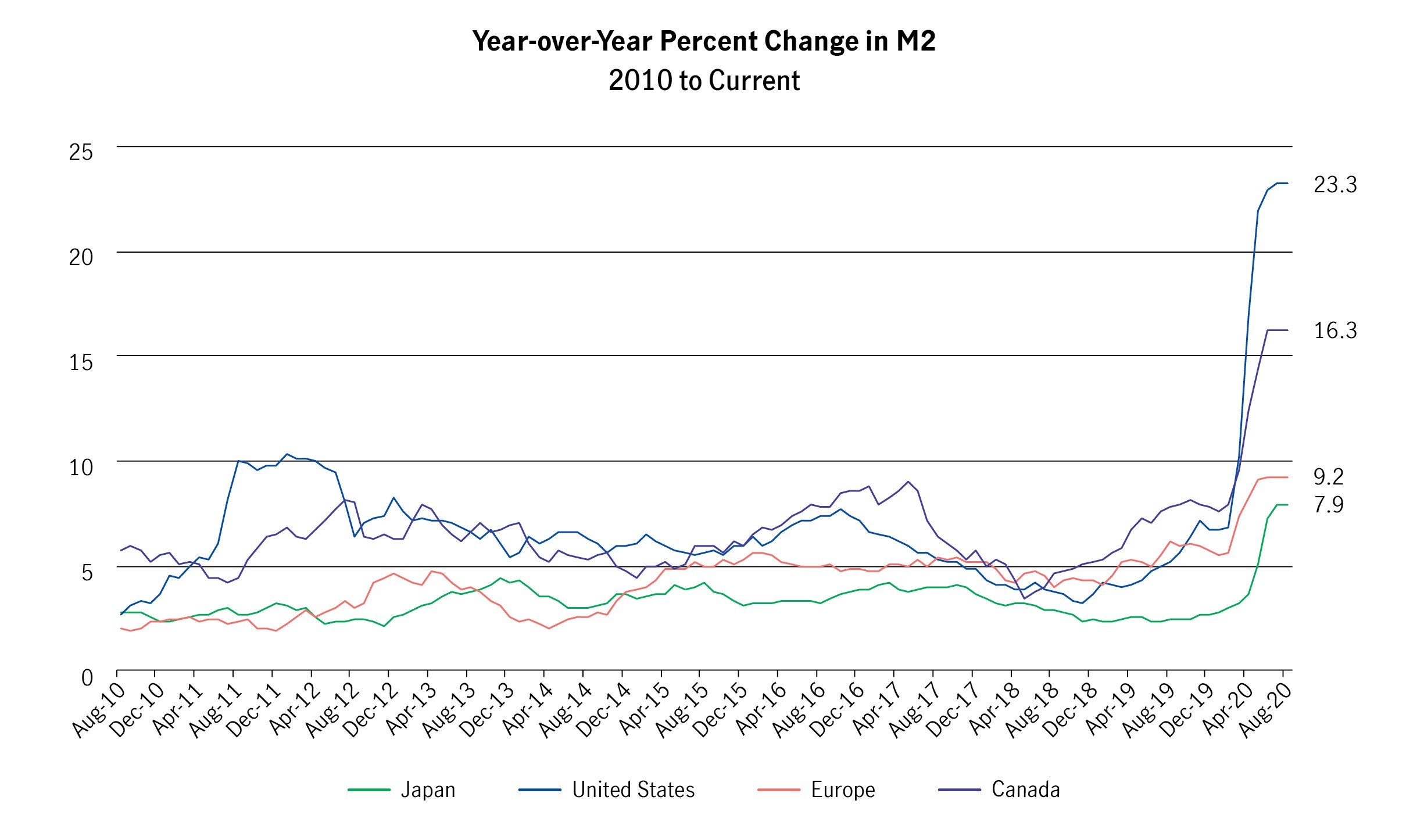 There would be little argument that quantitative easing to support the economy during the first wave pandemic shutdowns was needed for stability. But without the economic growth required to balance the substantial increase in the North American money supply, inflation becomes the next challenge. “We expect to see an increase in inflation going into 2021, settling in around the range of 2.5 to 3 per cent for an extended period of time. This will be monetary inflation supported by further U.S. fiscal stimulus, leading to further devaluation of the U.S. dollar,” says Petursson.

Our inflation model continues to suggest higher inflation, not deflation. 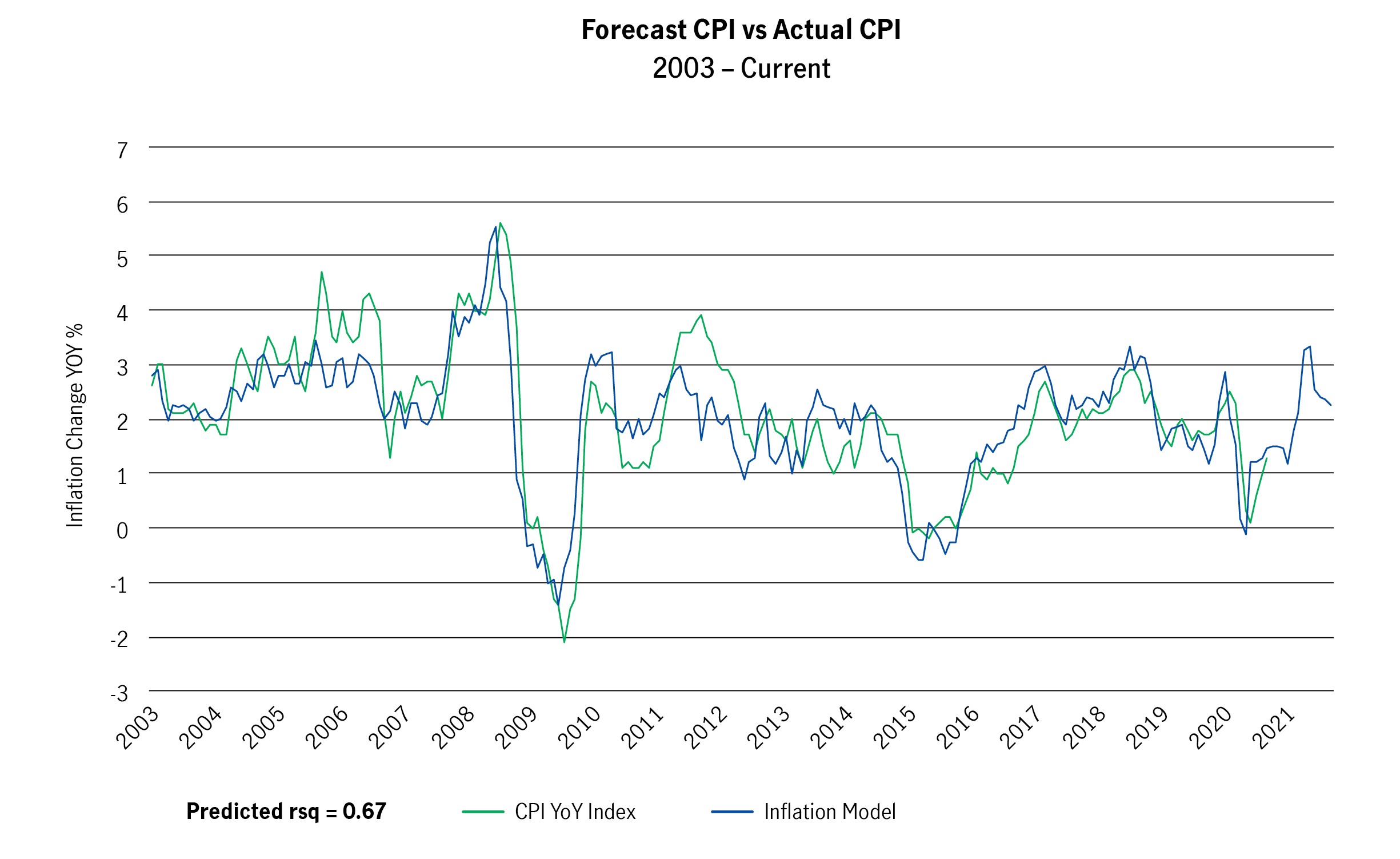 Compared to other currencies, the U.S. dollar is down by about 8 per cent from its high of March 2020. When the U.S. dollar falls, it has an inverse effect on commodity prices. “If we continue to see weakness for the U.S. dollar, commodity prices will push higher. That helps to support the price recovery for oil and copper, with the expectation that those prices will go higher,” says Petursson. “From a bond perspective, we can expect a steeper yield curve. A 10-year U.S. Treasury bond currently sitting at 65 basis points could be 1.2 to 1.5 per cent by mid-2021.”

At the beginning of the pandemic, some predicted a weaker Canadian dollar in the range of US$0.60, along with an overall weaker economy due to high consumer debt. However, because of its close connection to oil prices, the Canadian dollar has remained stable. After a sharp price drop in April, caused by speculators and storage issues, oil prices have recovered nicely and are anticipated to move higher as manufacturing demand rises – with predictions of US$40 to US$45 a barrel and the Canadian dollar at US$0.75 to US$0.77.

Recently, the loonie's relationship to interest rates has completely broken down and the shorter term moves can be entirely attributed to the price of oil, specifically West Texas Intermediate (WTI). As oil prices have fallen more recently, so too has the Canadian dollar. Expect the Canadian dollar to remain rangebound between US $0.75- 0.77 on US$40- 45/bbl.

In terms of good investment opportunities, look to gold. “Over the long term, gold has correlated with inflation. If you want to hedge inflation today, I think gold is a good way to do it. I think it’s currently undervalued, and we project a rise to US$2,250 per ounce. Manulife’s asset allocation teams have been increasing their positions in gold, seeing the price rise from US$1,400 an ounce in mid-March to current levels of around US$1,900,” says Petursson.

The presidential election may have stirred emotions and caused minor market reactions, but historically, whoever sits in the Oval Office tends to have little impact on market returns. Rather, government policies and the valuation of the stock market tend to be the main drivers of market performance.

Some interesting statistics come from looking at politics and market performance:

It’s worth a reminder that regardless of who’s in the White House, each four-year period has its own unique set of challenges based on interest rates, valuations, inflation rates and central bank policies. More than politics, what drives market returns are investing fundamentals, earnings and valuations.

Far more money has been lost by investors trying to anticipate corrections,

than lost in the corrections themselves.

Market volatility can be quite concerning for your clients, but the message is clearer than ever: stay the course and focus on the long term. “I expect we will continue to see pockets of volatility, even with the low interest rates and low inflation, because certain valuations are stretched, especially in the technology sector,” says Petursson. “More than ever, it’s important to stay disciplined – don’t go chasing stocks and sectors.”

Dollar-cost averaging continues to be a key fundamental that takes the guesswork out of trying to time the markets. Regular, investment contributions scheduled monthly or quarterly guard against missing opportunities. For more on investment fundamentals, read about Market shocks and the Cash wedge strategy in this issue.

And understanding a client’s tolerance for risk and the need for adjusting investment portfolios will likely spur ongoing conversations in the months to come. As the global economy continues its steady recovery, the Manulife Investment Management Capital Markets and Strategy team is increasing its equity exposure to 65 per cent of the model portfolio, with a focus on emerging markets. “Investors can take advantage of volatility to rebalance and add to equities – especially from cash and long-duration government bonds that we believe will face headwinds of higher inflation, higher long-term interest rates and weaker purchasing power due to the monetary and fiscal inflationary forces,” says Petursson.

Current market volatility can be quite concerning for your clients. Bring the conversation back to basics and remember to focus on the fundamentals. Consider a dollar cost averaging strategy to bring new money into the markets, and don’t forget to rebalance existing assets to take advantage of the opportunities that volatility can provide.