People will need to do more than curb their spending to fend off the rising cost of living.

Anyone who has bought a week’s worth of groceries, filled up their gas tank or shopped for new furniture or appliances recently will have realized that we are no longer living in a pre-pandemic economy. The after-effects of supply chain and labour disruptions, sluggish consumer spending and restrictions on travel and activities over the past 18 months have offered fertile ground for increasing monetary inflation.

The mere mention of inflation can instantly raise consumer anxiety; we feel helpless when confronted with the reality of paying higher prices for the products we buy regularly. But does this need to be the case? Aside from some rare or extraordinary circumstances, prices for goods and services go up all the time – the difference now is that, for the first time in a decade, prices are rising considerably higher and faster than normal and it’s catching many people off guard.

With no certainty whether inflation in its current form will be transitory (temporary) or persistent (long-lasting), clients will understandably have concerns about what effect, in either case, it may have on their wallets and financial goals.

In any economic environment, investors should remain focused on their long-term goals, but even more so during periods of uncertainty. Those investors who headed for the sidelines during the market crash in March 2020 are probably still regretting that decision today, given some indexes posted record highs within months of the initial slide.

When it comes to inflation, the stark reality is that there can be a significant cost associated with failing to take action. Clients may not realize that if, for example, they have $10,000 sitting in a savings or money market account that generates 0.5 per cent interest while inflation is running at 3.5 per cent a year, they’re losing purchasing power to the tune of $300 annually. But a slight change in strategy may be all it takes to protect against the erosion of any cash savings that are garnering little or no interest.

In times like this, savings and low-yielding market investments need to be repositioned to help protect these assets from inflation. Granted, this entails a willingness for clients to accept more risk – but investing in companies, sectors or asset classes that typically do well in an inflationary environment may not be such a difficult sell. Clients may soon come to realize the breadth of available investment options means value-driven opportunities exist in just about any scenario.

There can be an upside

Historically, inflation has often been the sign of a strengthening economy. It signals that higher demand for goods and services is acting as a springboard for price increases. Some companies with pricing power can profit early in an inflationary environment by choosing to pass higher costs onto the consumer. However, prices can rise so quickly that customers become reluctant to purchase certain goods at all, citing affordability.

This time, the main cause of inflation is currently thought to be supply chain disruptions brought on by pandemic lockdowns, border closures and labour shortages in some sectors. As conditions improve, pent-up demand for goods and services could move inflation above two per cent.

Inflation can also play a positive role in building a better economy. When the central banks achieve their parameters for a healthy economic outlook, such as robust employment and inflation above two per cent, they can build in a cushion for the next market event by raising interest rates. Rates in the United States and Canada have been kept near historic lows through the pandemic (see Graph 1 below), and any further reductions now would land them in negative territory. Having some excess room to lower interest rates and stoke the economy can be a good thing. The next time the economy slows down, higher rates would give central banks the flexibility to cut them to stave off the possibility of deflation, or a contraction of economic activity. 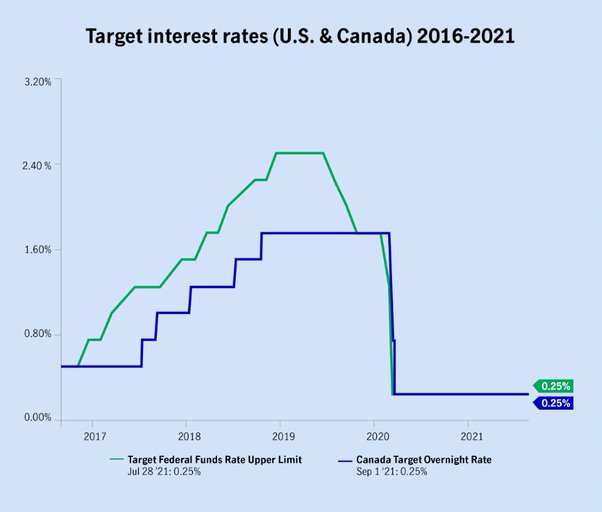 There’s been a lot of talk this year about whether the spike in inflation will end up being transitory or persistent. But it’s obvious to everyone that this bout of inflation is real – all they have to do is look at how much more everything costs.

The recent plight of the lumber industry in North America serves as a prime example of transitory inflation. Over the past year, the price of wood was subject to phenomenal increases practically overnight (as illustrated in Graph 2), and the substantially higher cost of materials was instrumental in helping some consumers decide against building a new backyard deck or cottage dock. As the exorbitant prices reduced demand, lumber prices retreated by about 70 per cent. Mills, which had hurriedly returned to near-full production as soon as it was deemed safe to do so, are now back to laying off workers. 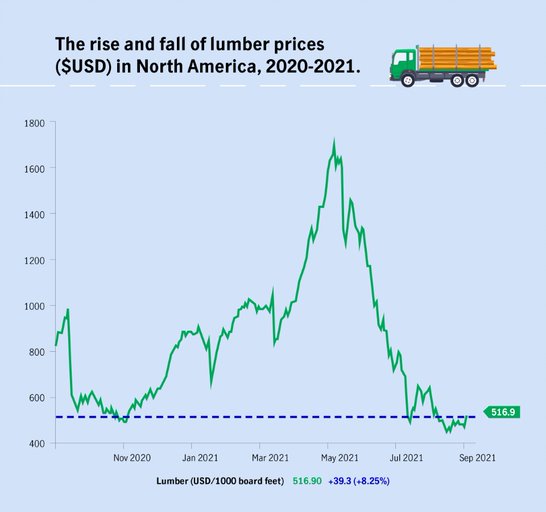 On the other hand, is there evidence to suggest higher inflation will persist over the long term? It is still too early to know for sure, but if the economy roars back, employment numbers continue to rise, more companies turn a profit and the markets stay strong, it’s likely that inflation will retreat and hover north of two per cent. This level is higher than 1.8 per cent average from 2010-2020 and is a key metric for central banks to begin raising rates.[1]

Manulife Investment Management’s team of investment strategists characterize the post-pandemic economic recovery as a “two steps forward, one step back” process, in which the economy and the markets trend upward but remain vulnerable to pullbacks in response to whatever disruptions the pandemic may yet cause.

The team points to the robust recovery that has driven economic growth to its current state and finds few reasons to expect a severe slowdown or recession in the near term. But how did they settle on this perspective? A key factor is that the money that sat idle throughout the pandemic is beginning to re-enter the system through consumer spending and investment, which conceivably could set the stage for a resurgence of the global economy that could surpass levels not seen since 2019. The team also constantly monitors changes in the U.S. 10-year Treasury note rate, a key indicator, which fell from 1.75 per cent at the end of the first quarter to below 1.20 per cent in mid-July and climbed to 1.55 per cent in late-September – a dramatic turnaround from the summer of 2020, when it sat at or near 0.61 per cent.[2]

Overall, the team’s mood regarding economic prospects remains optimistic. “Over the medium to long term, the fundamentals for the economy and markets remain constructive, with accommodative global central banks and consumers willing to spend – supported by a strong balance sheet and increasing employment,” says Macan Nia, Senior Investment Strategist at Manulife Investment Management. “We believe a strong economy will continue to put upward pressure on inflation and rates.”

Regardless of short-term market movements, the team continually aims to understand where the balance of risk lies. From their perspective, there is renewed concern that the more transmissible delta variant, which has become the dominant strain of the coronavirus, still has the capacity to hinder the reopening process around the world. Evidence of this began to surface with rising infection rates in the United States, which corresponded with slumping vaccination uptake among a sizeable segment of the population.

While Canadian per capita vaccination rates have surpassed those in the United States, a large enough gap remains for the virus to take further hold among the unvaccinated and begin carving into the progress that’s been made against the pandemic in this country. If case numbers rise too high, we could see a return to more restrictive policies on gatherings, travel and recreation – and the spending associated with those activities, which only a short time ago was helping to put the service and hospitality sectors back on a promising path.

However, according to Kevin Headland, Senior Investment Strategist at Manulife Investment Management, there’s little reason to believe inflation will remain at current levels (near five per cent) on a year-over-year basis. He does expect it will stay above two per cent for quite some time, noting that “the team expects the U.S. Federal Reserve (the Fed) to keep rates near zero bound for a while yet.”

With the expectation that the Fed will continue to keep short-term rates low well into 2022, it’s reasonable for investors to assume interest rates are unlikely to be raised before the fourth quarter of 2022.

A wait and see approach

In late August 2021, U.S. Federal Reserve Chair Jerome Powell said that the Fed has two courses of action against inflation: asset purchasing and managing the overnight rate. Asset purchases essentially keep the government in business by buying the bonds that give the government enough capital to support the economy. As the picture continues to improve, the Fed can begin reducing asset purchases, a process known as “tapering,” which will pump the brakes on the economy and rein in inflation towards more familiar levels.

This outcome, however, will depend on the course of the pandemic and the level of threat it continues to pose. Despite some very positive wage and employment numbers in recent months, moving to taper asset purchases or hike interest rates before more data shows increased confidence in economic and employment trends would be comparable to rocking a boat in rough water. In the meantime, the Fed remains firmly anchored to a “wait and see what happens” approach.

Today’s rising prices and the unpredictable nature of COVID-19 have done little to alleviate the financial anxiety experienced by many Canadians. Clients are increasingly concerned about how their money might be affected by recent and future developments. This could be an optimal time for advisors to pursue deeper relationships with clients and help them through the information clutter.

While there has been progress towards correcting some of the economic damage inflicted by the pandemic, the economy still needs to work through existing circumstances, including the prospect of enduring inflation. In the meantime, keen advice and a wide variety of investment options can provide clients with the means and flexibility to harness growth capable of bypassing the negative effects of inflation so they can remain confident about realizing their long-term financial goals.

Talking to clients about inflation

Rising inflation can add some extra anxiety to already volatile economic times – and not everybody will be prepared to make the best of it. Here are some points to remember when helping clients navigate their way through an inflationary period.