Why inflation may be more persistent through 2022.

As economies begin to reopen after two long years of pandemic stops and starts, one unforeseen consequence has been the effect of all the pent-up demand for goods and services being unleashed into a slowly recovering environment. Consumers are now making up for lost time and spending money on things that have been sitting on the backburner. But on the other side of the equation, global supply chains are now struggling to keep up with demand due to shortages and delays in raw materials critical for manufacturing. The result has been extensive delays for such things as car parts, furniture, appliances, even breakfast cereal and more.

Looking at this situation, central bankers and economists alike initially felt that this rise in demand versus availability would be fleeting, and thus the term transitory inflation entered the lexicon. The phrase has served as an explanation for the skyrocketing prices of everything from used cars to lumber. While it has proven to be somewhat correct in the case of lumber, prices of other economic inputs continue to be elevated two years after the phrase was minted.

As goods begin to move through ports more fluidly and people move about more freely, so-called transitory factors should begin to recede. But with year-over-year inflation in Canada running at 4.8 per cent in December, the removal of the transitory factors probably won’t quell inflation as much as previously thought. The reason is that the short-term inflationary factors have opened the gates to some causes of longer-term inflation.

One of these causes may be wages. As the in-person economy reopens all at once, the demand for labour is soaring in several industries, such as travel, hospitality, and the entertainment and arts sectors. These industries may need to double their work force, causing a surge in demand for workers. Combine this surge with a stagnant labour market and you have a perfect scenario for soaring wage growth. In fact, the average hourly earnings in the United States grew by 6 per cent from April to June 2021, which is two to three times the typical growth rate in recent decades.

However, another significant issue is the fact that many people are opting out of the workforce. 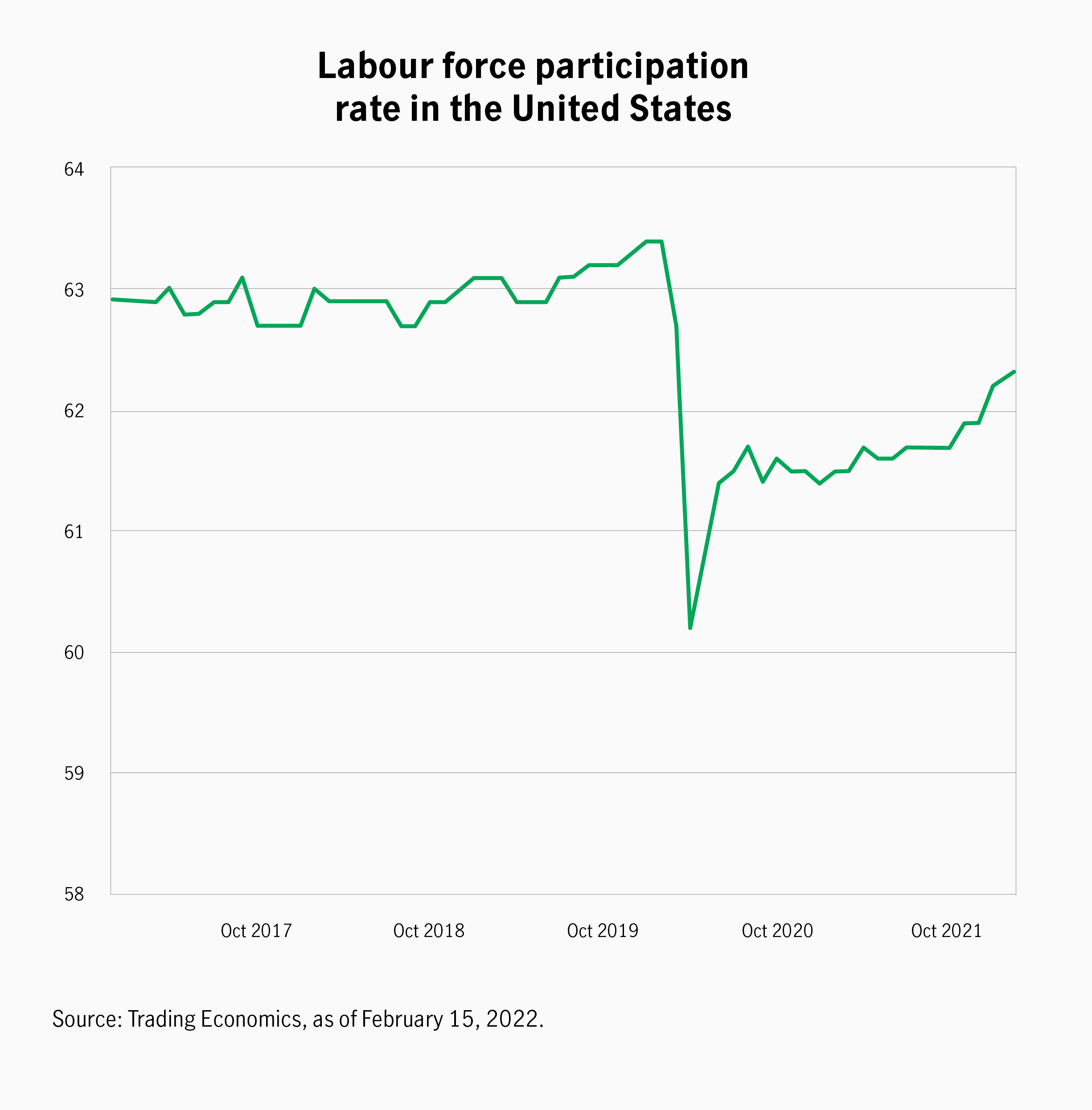 There are several theories as to why people may be choosing to stay home. They may be concerned about the risk of COVID-19 infection; they may be unmotivated as a result of government unemployment benefits; or they may face child-care issues related to pandemic-related closures of day cares and schools.

Lower participation in the work force puts more pressure on wages as more companies compete for a smaller pool of labour. But wages are a very sticky inflationary indicator because once they go up, it’s very hard to bring them back down. So, given the possibility of longer-term inflationary pressure, what can central banks do?

Over the long term, inflation is expected to decrease back to around two or three per cent, a level that is still above the two per cent target set by many major central banks in developed nations. So, how can the central banks respond to the threat of inflation? They can raise their overnight lending rates to make borrowing less attractive, which could put the brakes on a steaming economy. The U.S. Federal Reserve has already signaled six rate increases in 2022, starting with a 25-basis point increase in March. The Bank of Canada increased its rate by 25-basis points to 0.5 per cent in March.

If we look at what’s causing inflation, is raising interest rates really the answer? The problem may be that central banks have limited tools to work with.

What can help fight this specific type of inflation is more production output – more new home construction and increased durable goods output – and relief for global supply chains. If it becomes more expensive for construction companies and automakers to do business, higher interest rates could reduce production, adding more fuel to the inflation situation.

One of the strategies employed by the U.S. Federal Reserve is the delivery of clear messages. After every Fed meeting, hours are spent analyzing the words and phrases in its statements for deeper meaning. Lately, observers have noticed that transitory has completely disappeared, and the reason may be to offset an overreaction from forward-looking markets to any deviation from previous Fed guidance.

Show me the money!

Financial services and insurance companies tend to be the first sectors that spring to mind when interest rates begin to rise. Rising rates are usually a sign of a strong economy, spurring loan growth, which benefits lenders. The lending companies can also profit from rising rates because they can earn a larger spread between what they pay to clients on their savings accounts and what they can earn from high-rated debt such as treasuries.

Insurance companies have a direct relationship with rising rates: the higher the rate, the greater the growth. Insurance companies must offset their liabilities from underwriting insurance policies by holding high-quality longer-term debt, like 30-year government bonds. The higher the coupon on that debt, the more profit an insurance company will generate. But it’s not only life insurers who benefit. A booming economy usually means more home and auto purchases, which increases the number of policies underwritten.

Consumer discretionary stocks also tend to do well in a typical rising rate environment. When the economy is doing well, consumers usually have more cash on hand and are willing to part with it for goods outside the realm of consumer staples, such as TVs, laptops, and mobile devices.

Over the last several months, the stock markets have seen a noticeable rotation to value. When the pandemic still had a deep hold on the economy and central banks were flooding the market with “easy money,” it felt as if every stock was hitting new highs. The “meme stocks” were born, with an unprecedented run of highs and lows. Companies with little to no earnings and incredibly high price-to-earnings (P/E) ratios were sent skyrocketing by speculative investors. 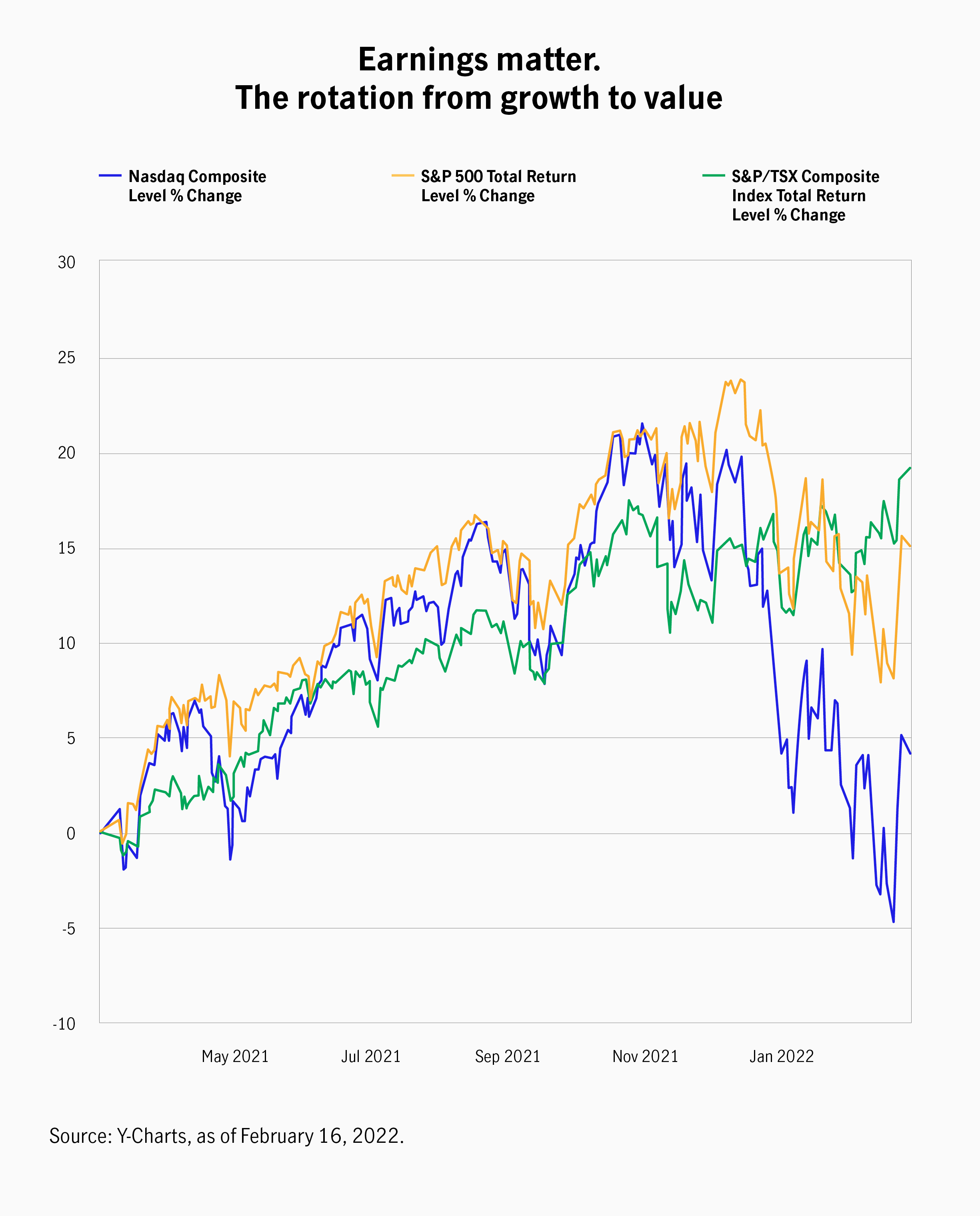 But as we head into the second quarter of 2022, speculation and nosebleed valuations appear to be giving way to deep-value stocks with lower P/E ratios as investors opt for companies with strong earnings in the face of rising yields. The graph above shows the outsized drop in the Nasdaq as investors began rotating from growth stocks into value-driven names.

Shorter-dated, higher-yield debt may have some cushion in a rising rate environment. As restrictions lift and countries gradually return to normal, an astute bond manager may be able to identify some “fallen angels” in the fixed income market.

The flexibility to move into different types of securities may also help investors this year. Bank loans tend to do well in a rising rate environment, and convertibles may also add some value to fixed income portfolios with (typically) short duration and some equity-like characteristics contributing to overall returns.

But as explored in the article Fixed income may not be dead, how is it possible to identify these opportunities for your clients? A global fixed income product with the ability to move across the yield and credit spectrums may be the answer. In the coming year, flexibility will be key in the fixed income space.

While no one can say for sure what the rest of 2022 holds, much of the world appears headed into a situation where the central banks will begin to pull levers to quell inflation. This will likely result in a rising rate environment. It’s also worth mentioning that we’re truly in unprecedented times. There has never been a recovery quite as rapid as the one from the market crash caused by COVID-19, which took even the most experienced market watchers by surprise.

On top of that, despite inflation, consumer spending looks to be healthy. Fear of the pandemic appears to be receding, encouraging more travel. Millions of people with extra savings from the lockdowns may finally feel comfortable taking that postponed trip. Credit card spending is also up 20 per cent from pre-pandemic levels.[1]

The last time the U.S. Federal Reserve embarked on a rate-hiking cycle, both growth and inflation were mild. The current economy doesn’t appear likely to be derailed by rising rates. But as central banks begin to raise rates, rotating into some more value-oriented positions may help portfolios benefit from the environment. Real earnings and dividends may replace some of the more speculative growth stocks for performance as the rotation into value continues to pick up steam.